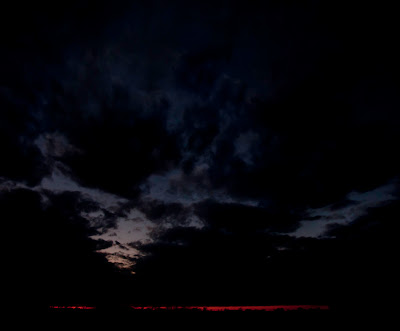 As the wife and I drove down interstate 70 heading back home, my thoughts were replaying on how two day’s earlier we made this trip because of the emergency operation her mother had to have. My pondering was quickly redirected by the voice of our GPS indicating it was about the switch into night mode. As my eyes quickly shifted I became aware of how beautiful and quickly the quality of the light was changing, as the warm glow of the sun had almost faded in the blackness. It was if the blackness was devouring all the light from the sky. As I looked westward my eyes caught this little shimmer of red on the horizon. My visional being did not process this as a beautiful end to a sunset, but only conveyed this feeling of darkness, the end of what was. Why was my feeling being consume in such a manor? was it because we were close to the end of our trip? Or maybe because it was the end of 2010, I guess I could have had a different perspective on this image, in the context of it being a new beginning, but that’s not where my heart or mind was when I made this image.


Posted by willjonesphoto at 8:43 PM